Log in to add to favorites Add Personal Notes

In two previous papers it has been shown that the dose response of Bacillus pumilus spores, irradiated under specified standardized conditions, is independent of beam quality for  a wide range of beam qualities (Tallentire et al., 2010; Tallentire and Miller, 2015). To expand the range of beam qualities covered by the conclusions of the previous papers we investigate the response of B. pumilus spores subjected to irradiation in a 150 kV x-ray beam.

Microbiological test pieces comprised of test filters with a known number of hydrated B. pumilus spores located on the surface of a GS grade cellulose acetate membrane filter placed in a Petri dish was used.

The survival curves obtained from irradiation in the two radiation fields are shown in Figure 1. It is evident that a common response function can describe the survivability of B. pumilus spores in these beam qualities. 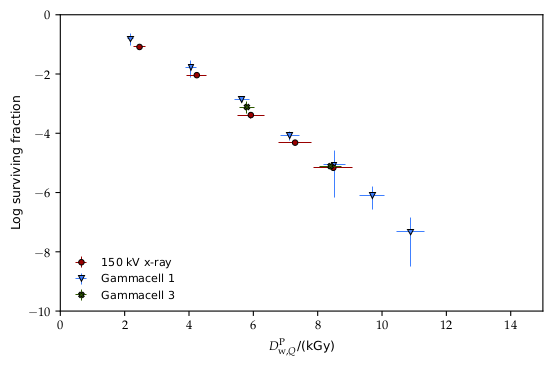 The radiation response of water-hydrated B. pumilus spores to a 150 kV x-ray beam was found to be identical to the response to cobalt-60 gamma rays within experimental uncertainties.

Tallentire A, Miller A. Microbicidal effectiveness of x-rays used for sterilization purposes. Radiation Physics and Chemistry 2015;107:128-30.

Tallentire A, Miller A, Helt-Hansen J. A comparison of the microbicidal effectiveness of gamma rays and high and low energy electron radiation. Radiation Physics and Chemistry 2010;79(6):701-4.

< go back one page

If you have any questions, please email us (info@imrp-iia.com) or come to the onsite registration desk.
© 2023 IMRP